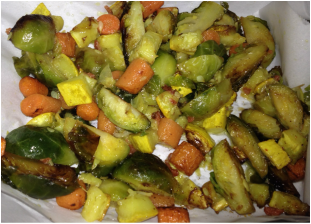 This is one of my favorites!! I ate every morsel the family didn't and felt no guilt.  It's vegetables, for goodness sake.

Saute' all vegetables in olive oil over medium heat until soft but not mushy.Brussels sprouts will be brown in some spots.  Drain oil, place in serving dish.  Add bacon and garlic salt, stir and serve. 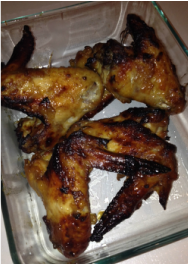 Another recipe I found and modified so we can all eat it - especially Josey!

Of course, you can use any cut of chicken but since I had wings, that's what I used.  The original recipe called for brown sugar but this recipe uses agave nectar (a lot).  Any sweetener you like would work.

Saute onion in olive oil, add garlic powder and nectar.  Place wings in a gallon size freezer bag and pour mixture over them.  Marinate 2-4 hours. Bake at 375 degrees for one hour.

The chef was in today!  Jo is the best cook in the house and would like to be a professional chef.  Tomorrow night I'm taking an appetizer to a ladies' night event and asked if she would remind me the recipe for some of the things she made at Christmas when she helped cater a party.  Turns out, she made them for me.  Poor kid can't eat them now, but she says baking/cooking calms her.  They're her own recipe, inspired by something she saw on Pinterest.

How to make them:
Roll out crescents, leaving them attached so they roll out as rectangles (4 pieces together).
Spread about one tablespoon ranch on each set of two flattened rolls.
Place cheese on top. Usually a couple tablespoons or more.
Add bacon bits, also about a tablespoon - more if you like bacon!

Roll them up and slice before baking.  Place on a cookie sheet and bake at 375 for about 5-8 minutes, until just browned.  They bake much faster than plain crescent rolls.

--^note^--All measurements are approximate.  Josey doesn't measure so we had to guess!
However, we had to fight off the brother and sister to keep them from eating this for dinner and leaving me none to take as appetizers.  They're really good. 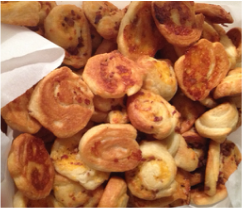 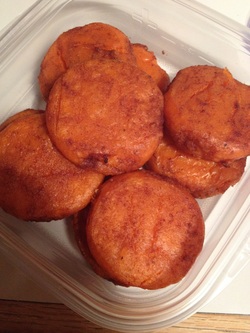 The original recipe I got was for Valentines Day and pictured heart-shaped wedges, so this could easily be adapted for a holiday or just for fun.  As usual, I modified the ingredients so Josey could eat them and the rest of us would like them, too.

How to cook them:
Slice sweet potatoes about 1/2 inch pieces.  Place in a gallon-sized ziploc bag, add all other ingredients and toss until the potatoes are well coated.  Place on a cookie sheet in a single layer and bake at 400 degrees for about 30 minutes.  The original recipe called for turning them but I found they had become mushy and were hard (impossible!) to flip, so I left them alone.  When finished, they had become firmer on the outer layer, had cooked thoroughly, and were easy to get off the cookie sheet for serving.  These are a nice "sweet" to add to a meal and they freeze, thaw, and microwave well. 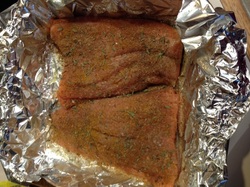 At our house, salmon is one of my husband's favorites but he always wants it baked with lemon pepper.  The problem now is that Josey is allergic to lemon AND black pepper so I went looking for another way to bake it that everyone would like.  Honestly, the kids usually groan when they hear we're having salmon for dinner.  This new spice-combo has them ASKING for salmon.  That's new!

I coated the salmon in curry, then added the other spices on top, and lightly sprayed all of it with olive oil.  Bake at 350 for 30 minutes, or until done to your preference.  My husband likes his drier, cooked longer, and the rest of us like it tender. 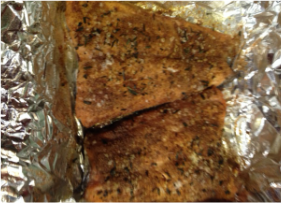 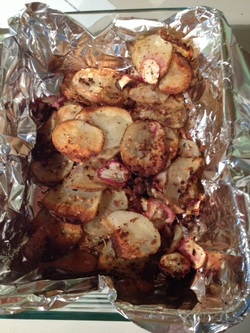 How to cook it:
Toss all ingredients into a gallon sized ziploc bag and shake until well mixed and coated in the olive oil and salt.  Bake at 350 for 30 minutes or until edges are brown.

This worked as a side dish and although the radishes don't add much taste, they add color and absorbed the flavor of the other ingredients. It was also  a way to get the kids to eat radishes. 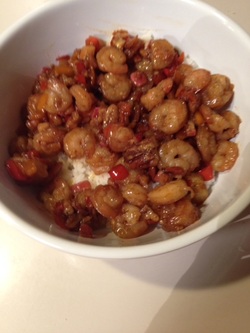 This one was a hit with the big sister, too.  She was headed out to dinner with her boyfriend and he had to drag her away so she wouldn't be full of kung pao shrimp! Traditionally, this recipe has peanuts or cashews, and has celery, but my kids aren't fans of cooked celery.  This modification is so my Lymie with allergies could eat it and so all three kids would WANT to.  Thankfully, it worked.

I omitted chili sauce and garlic sauce because there were too many questionable ingredients - like vinegar and sugar, and "spices", whatever they may be. There's got to be a little fermenting left in the sauce, but apparently was so little it didn't create any reaction in my patient.  Mission accomplished.

Directions:
Heat olive oil in a pan over high heat.  As soon as the oil is hot, add the wine.  Yes, wine is forbidden in a Lyme/yeast free diet.  I cooked it for a good 10 minutes before adding the next ingredients, and continued heating the mixture until most of the alcohol was out.  Yes, I looked it up to see how long and what heat setting. I'm sure there was some left, but this was a better alternative than mystery ingredients in the store-bought sauce.   Must've worked, because Josey had no reaction whatsoever and the taste was great.

Now add garlic, nuts, bell peppers.  I left these in the skillet, in the wine and oil, for about 5 minutes. Then add onion and cook until it becomes translucent. 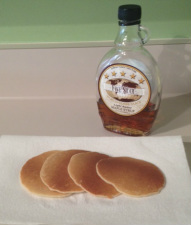 Pancakes and Pure Maple Syrup
We've recently learned, through the help of our LLMD and the testing he asked for, that Josey has multiple food allergies along with Lyme disease and yeast overgrowth (Candida albicans).  This has changed the way I cook and what I buy and it has called for some serious creativity.  As I search for recipes, I find most include something Josey can't have.  Innovation is taking some time but it"s worth it to find foods we can all eat and enjoy together as a family.  There have been some real duds.  Today I made pancakes that are gluten free, sugar free, mlik free, egg yolk free..... and yummy!  Success!  What's in them?

** Pure maple syrup to taste - Jo can't have cane sugar but the ONLY sweet she can have that isn't stevia is pure maple syrup without additives.  I can cook with it, too.  This company sells coffees, pancake mixes, syrups and other treats.  Nice people and excellent products.  Obviously, we highly recommend them.  Click on the pic for a direct link to the company.**    fivestarcoffee.biz

This is the 3rd time I've made these and they get better every time.  Mostly because I had to figure out what the heck I was doing!  The first time they were too thick and more like small round sponges because I used too much flour and didn't add extra milk.  Second time was better but still looked like "fake" pancakes, as Jo told me.  Today, though, I got it right!  In fact, I liked them better than others I've made from "normal" ingredients.

How to cook 'em:    Combine the dry ingredients in a large bowl.  Stir just to mix.   Next, add the last four ingredients and mix.  You can use a spoon, whisk, whatever suits you.  There will be a few small lumps but they disappear when cooking.  I use a non-stick electric skillet so I don't have to use any additional oil or butter.  Use about 1/4 cup batter for each pancake.  Let them cook on the first side until they're bubbly all over; just a couple minnutes.  Then flip them and cook a minute or so more, until they're as brown as you like them.  See the paragraph above re: adding milk and flour.  I like the batter to be about the consistency of a melting mlkshake:  not so thin that it's watery but not so thick you can't drink it.  This seems to make the lighter, just right pancakes we like.